I wanted to introduce to you Michael L Brea, a young Haitian-American actor I just bumped into but to call him just an actor would be an insult. 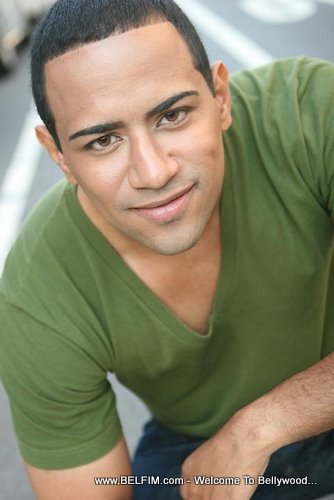 You may have seen Michael L Brea on the hit TV Series Ugly Betty starring America Ferrera and Vanessa Williams.

Michael also stars as one of the dancers in the upcoming Hollywood movie Step Up 3-D.

If you've ever eaten at a Subway Restaurant in Brooklyn, New York, the one on 1709 Broadway, then you've been to a Restaurant owned my Michael L Brea because he is also an entrepreneur.

Michael L Brea is well known for giving away FREE turkey sandwiches on Thanksgiving. His Haitian mother, Yanick, thought him a thing or two about giving...

Perhaps you've seen him on a poster or a billboard for the Coca Cola Full Throttle Energy Drink.

The last time I spoke to Michael Brea he was in Spain. L-ap jere biznis li...

I don't know if Michael has enough "BULLS" to run with the bulls in Spain... I sure don't...

Michael L Brea was born in New York City to Haitian parents, Marcel and Yanick Brea, and he is very proud of his Haitian heritage... e poukwa pa?

"Growing up, my father used to tell me these great stories about Haiti and how we gained our independence in 1804. I am fascinated and proud to be Haitian-American. Which is the reason why I made it into film! I want my fellow American brothers and sisters to know the history of Haiti. I want to report the history of both worlds (Haiti and America) through film." (read more)

Michael L Brea wants to make a big name for himself in Hollywood and all I can say to him is...

« A Haitian TV Series on DVD, Would you buy it?
Newer Article: