The City Of North Miami Shows Apreciation For Haitian Talent

Last night, at the North Miami Performing Arts Theatre, it was more than just the Miami Premiere of the movie The Innocent Victim, it was a talent show and an award ceremony. Many recognition awards were handed out by Haitian-American officials from the City of North Miami Beach, we all witnessed Haitian Rock-and-Roller ALAYE smash yet another guitar, that was fun... And everyone in attendance had a wonderful time. 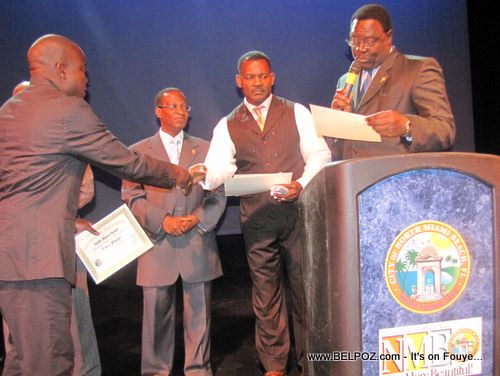 Here is a photo as Haitian actor and poet Andre Fouad receives his award...

The evening was hosted by the great Bob Lemoine. I didn't know he was also a comedian but Bob Lemoine has some good jokes...

Not only did we get to see Jean Galummette's movie The Innocent Victim, we've got to to hear some great poetry, great music, and some really good jokes.

We also got to enjoy the talents of young Haitian kids from AMS music school, the Taekwondo moves by some of our Haitian Karate Kids, performances by The gospel girls, and many more.

It was really an artistic evening.

There were many awards distributed yesterday everning by Government officials of the City of the North Miami Beach.

Councilman Philippe Derose said in his speech: "We should not wait until people are no longer there to honor the works that there are going but we should honor them when they are alive."

Many certificates ware handed out to Haitian actors, filmmakers and others members of the Haitian media in South Florida

Once we have the complete list we will update you.

I, Woodring Saint Preux, was one of the lucky recipients. Now I know why Jean Michel Galummette insisted that I be on time (I'm always on time! LOL).

I would like to say thank you to both Club Des Artistes and the City of North Miami Beach for this great honor.

There were many other VIPs in attendance, take a look at the event photos to see all of them.

If you were at the Miami premiere last night, take a minute to give us your opinion of the movie and most importantly, the evening in general.

Mary Jane Movie Premiere, How Was It? »

Haiti Pride As i'm concern about my Haiti. After an Heavy natural disaster It's become back dated... see more
Reply · October 25 at 3:09 PM

Name (required) E-mail (required, will not be published)
Subject: The City Of North Miami Shows Apreciation For Haitian Talent edit