Bordering Excessive - by Jimmy Jean-Louis --- Having flown to Santo Domingo to attend the "Dominican Global Film Festival", I came to the conclusion I was too close to home not to make a quick trip across the border to visit my mother and father in Haiti. After all, it is a mere 5-hour drive and I had a couple of days to spare before my flight back to Los Angeles for my daughter's birthday. By all calculations, I had plenty of time to visit the folks and enjoy some rest and relaxation. What could possibly go wrong? 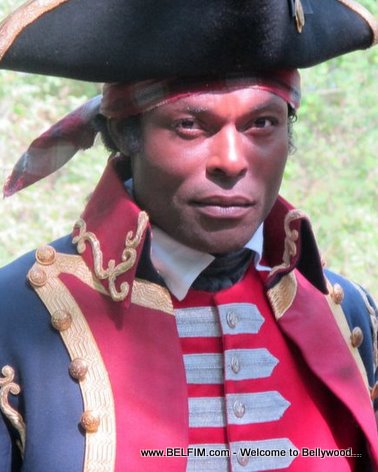 I hitched a ride with a friend from Santo Domingo to Port Au Prince (PAP) in less than 5 hours. Crossing the border into Haiti only took a few minutes. Once in Haiti, I enquired about flights back to SD, but to my dismay, I learned that there are no flights from Saturday morning through Sunday evening from PAP to SD.

I wasn't that concerned however as, in principle, it should only take me 5 hours to drive back to SD. All I had to do was find someone willing to take an extra passenger. So after a brief visit, my mother packed a small suitcase of my family's favorite local delicacy, Cassava. Were I to return from Haiti without it, my kids would have sent me back! She also prepared a lunchbox of rice and beans, like only a mother could, and we said our goodbyes.

At 3 pm on Saturday, November 16, I drove to the Dominican Republic border at Jimani to catch a 5 pm bus to the capital City of SD. Crossing the border was quite easy, but once on Dominican soil, I found myself in an unusual situation. I was immediately surrounded by a handful of people, some of whom wanted to help me acquire the Dominican Visitor Pass, others wanted to help me exchange money, one wanted to check the contents of my small black suitcase.

After checking the bag full of cassava, the man, whom I assumed to be a Customs Agent, decided that he would charge me to enter the country with the bag of cassava. During the next 5, very confusing minutes, the five people were all talking at once, I was persuaded to convert US-$100 to Dominican pesos (DOP$). It was hard to identify who was Haitian and who was Dominican. Everyone spoke perfect Spanish. And it was only further into the journey that I came to appreciate how that distinction is often made, and the consequence of being Haitian in a hostile country.

The bus was due to depart in less than 10 minutes. A motor-bike taxi offered to take me the five minutes to the bus stop for a bargain of DOP$300. With my black bag between us, we drove off to the bus stop. The driver, a Haitian, decided to take the back roads in order to avoid the police officers who would stop us to ask for a "contribution" to allow us to continue. By the time we got to the station, the bus had just left.

Now, I'm quite an optimistic guy, but I started, at this point, to feel just a little paranoid. I was stuck in Jimani, where I know no one. I suddenly realized that the DOP$10,000 which I had changed at the border had disappeared. Until now, I am still baffled as to how this happened. The chaos at the border, my missing money, this driver making me miss a bus that I was only a few minutes away from, all these factors had me imagining all kinds of possibilities. So when he offered me the solution of taking a mini bus going to Barahona, where I could catch a bus leaving at 9 pm to SD City, I began to wonder if this were all somehow a set up. Is the bus really going to the city? Am I going to get robbed and dumped in a ditch, extorted for the remaining US$1,000 I have in my bag?

The minibus was quite empty, with only 6 passengers: the driver and his girlfriend, Miguel Angel, a composer from Spain, and a Haitian man and woman in their 20s and I. Everyone looked suspicious to me, but because I absolutely needed to get to SD to catch my flight back to Los Angeles, I was prepared to flirt with danger.

The drive was filled with tension. At one point a large truck pulled across our path. While other vehicles drove past, our driver inexplicably stopped. Is he waiting for friends to jump in and rob us? After much convincing, he set off again and it began to dawn on me why he was so on edge. Carrying Haitian passengers is a liability.

Fifteen minutes into the ride, soldiers with guns and immigration agents stop us at a checkpoint. We were all asked to produce our papers. The agents, unsatisfied with the identification of the two Haitian passengers decided to take them off the minibus for further questioning. The Haitian man spoke fluent Spanish but the girl didn't speak at all. It appeared that she was deaf and mute. The interaction between the agents and the Haitians was hostile, to say the least. They were treated with suspicion and handled roughly. I am not sure how the soldiers were persuaded, but eventually the two Haitian passengers were allowed back on the bus. The girl looked traumatized.

An hour later, we faced another checkpoint. By this time it was getting dark and the agents,their guns drawn, were sipping drinks. Again, the Haitians were taken off the bus and interrogated. The girl's demeanor began to unravel. She was shaking (visibly) but didn't say a word. I assumed that she had been through some kind of trauma, or that she had lost a close relative. She was clearly distraught by the ordeal. The agents and soldiers were all over her, insinuating that she's illegal, disregarding the fact that she had just passed about 6 previous checkpoints.

My suspicion of the other fellow passengers turned into concern for them. They were clearly just trying to get to their destination but were filled with fear, that at any point they could be arrested for being Haitian. I was boiling inside because I felt that the soldiers were completely disrespecting these two human beings, even the fact that I had portrayed one of the the greatest heroes of our time, Toussaint Louverture, did not give me enough courage to raise my voice. Let's keep in mind that I had twice recently seen the movie "12 Years A Slave".

By the 11th checkpoint, the agents openly asked the minibus driver why he was carrying Haitians. They lectured him that he should always check their passports. The driver's response was that he is just a bus driver, and that his 2 passengers had already passed 10 other checkpoints, so he didn't believe there was a problem with them.

The agent replied "I will fine you if you continue to carry more Haitians". The agents didn't care to hide their hostility towards Haitians. Both Miguel Angel and I were both shocked by the treatment the Haitians received. This crackdown on Haitian migrants is reminiscent of the Parsley Massacre, where more than 20,000 Haitians living in the Dominican Republic were executed.

By the time we arrived in Barahona, it was 9:15 pm and of course, the bus had departed. I was told that the next available one will depart at 4am. The two Haitians, having arrived at their destination,relaxed a little. To my surprise, the woman began to talk and joke. I was amazed and saddened to see the mental abuse they are willing to endure, probably on a daily basis, just to get by. Her silence was an act, a mask she wears to weather the abuse. Is she illegal? Is she legitimately working in the Dominican Republic? Is she a Haitian born in the Dominican Republic? Did she deserved the harassment she received, which at times seemed like a pastime for the agents?

My journey was far from over. Miguel Angel, like me, needed to be in the city by early morning. We discussed our options and came up with the idea of paying the driver a handsome fee todrive us the remaining 4 hours to the city.

We settled in for what we hope was an uneventful journey, however before I got a chance to doze off, the bus swerved and tilted so far that it felt as if we were going to tip over. Somehow, the driver set us straight and braked. The sound made by the floor of the bus, as it scraped the tarmac was deafening. When we stopped, it was only to realize that the floor of the bus was gone. We hurriedly jumped out of the bus only to be greeted by a swarm of mosquitoes. We still managed to push the bus off the road.

Miguel Angel and I decided to walk 2 hours in the dark to the next pueblo, rolling my suitcase full of cassava, stopping to refuel on mama's rice and beans. One slept on a public bench whilst the other kept watch. We finally caught a local bus at 5 am and made it to the city at 10 am, 18 hours after I set off from Port-au-Prince.

My adventures aside, and regardless of the political situation between both countries, the Dominican Republic can no longer ignore human right abuses against it's neighbor and must act to ensure fair treatment of Haitians in its country.

What is occurring is a travesty. Every person deserves to be treated with dignity and respect.