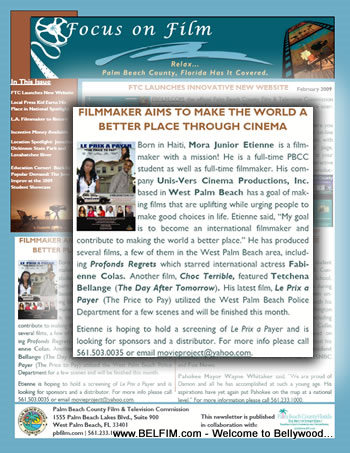 With the grand premiere of his new movie Le Prix A Payer in the horizon, Mora Etienne and his team are working tirelessly to make sure that everything goes smoothly.

Here is the article as posted on the FTC newsletter:

FILMMAKER AIMS TO MAKE THE WORLD A BETTER PLACE THROUGH CINEMA

Born in Haiti, Mora Junior Etienne is a filmmaker with a mission! He is a full-time PBCC student as well as full-time filmmaker.

His company Unis-Vers Cinema Productions, Inc. based in West Palm Beach has a goal of making films that are uplifting while urging people to make good choices in life.

Etienne said, "My goal is to become an international filmmaker and contribute to making the world a better place."

He has produced several films, a few of them in the West Palm Beach area, including Profonds Regrets which starred international actress Fabienne Colas. Another film, Choc Terrible, featured Tetchena Bellange (The Day After Tomorrow).

His latest film, Le Prix a Payer (The Price to Pay) utilized the West Palm Beach Police Department for a few scenes and will be finished this month.

Etienne is hoping to hold a screening of Le Prix a Payer and is looking for sponsors and a distributor.

The Palm Beach County Film & Television Commission (FTC) is an organization whose purpose is to promote Palm Beach county as a prime location for filming. The FTC has a production team that provides information, logistics, and assistance to anyone who is considering Palm Beach as a filming location.

If you are interested in contacting them visit their web site: pbfilm.com

2nd Annual Frantz Design Cinema Awards, And The Nominees Are... »