There is a rumor going around that Haitian Hip Hop superstar Wyclef Jean is dead. To make it worse, we found a picture of Wyclef Jean laying in a coffin... But is it true? 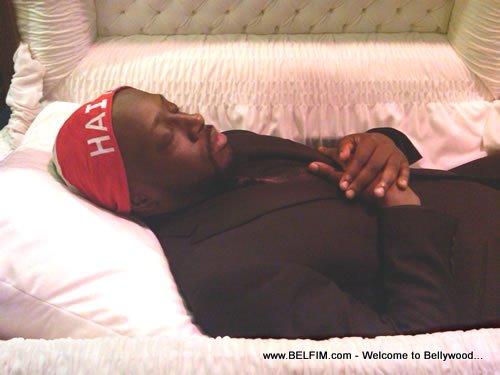 Wyclef Dead, Wyclef In A Coffin

The rumor about Wyclef Jean's death seems to have started in a message posted on a blog for Haitian President Rene Preval... at least that's how it got to my facebook page...

As you can see in this page, there is photo of rapper Wyclef Jean laying in a coffin!

Here is another one...

This is the first sign to me that it was a lie,
if Wyclef Jean was dead, he would not be laying in a coffin this fast.

But where did the rumor and photo of Wyclef in a coffin come from?

Remember guys...
yesterday was Halloween and...
Wyclef Jean was enjoying Halloween with his family, friends, and fans...

What? You still don't believe me,

Visit Wyclef Jean's Official Twitter page and see for yourself!

Wyclef: "Ima do something Crazy Tonight its Holloween so it has to really be spooky #wyclefwarriors"

Wyclef: "Happy Halloween Check out my twit Pic, the streets pronounce me Dead! Fresh from the funeral Home! #wyclefwarriors"

"RT @jazzwriterchick: @wyclef is dead. According to the source himself, he's been pronounced dead. Ha. Happy Halloween to you too!"

Wyclef: "Countclef this pic is in a Real funeral home with Real bodiessssss Happy Halloween!! I want Blood!"

Wyclef: "Happy Halloween Warriors - Streets Pronounce Me Dead!!!!! The Resurrection of the Dead!!!!"

Wyclef: "Halloween Music:::: Streets Pronounce Me Dead:::: Off "Hut to the Projects To The Mansion" in stores November 10th"

Did you Get it?

Wyclef is not Dead...

It's a Halloween Promotion Stunt... and a danm good one!

It Haiti they call it "Poisson d'Avril"

Wyclef has a song called Streets Pronounce Me Dead, and the album is coming out November 10, what better way to promote it than on Halloween night, in a coffin, on Twitter...

That was a great Halloween Trick, You got me Clef!!!