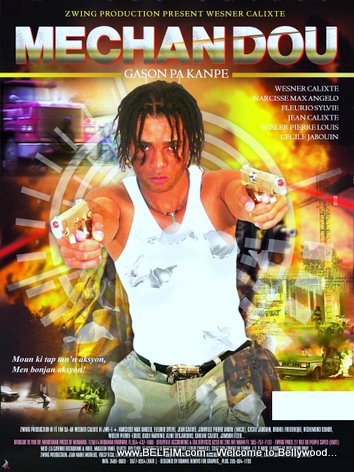 This afternoon, Sunday, July 25, 2010 you are invited to the movie showing of MechanDou, a new Haitian action film shot entirely in Haiti. This is...

thats why you see the haitians movie end up down like a piece of sh.it mora junior etienne beg me to come play for him in his project now he keep on asking me to have sex with him fuccc you mora. al coupe manmanw

I saw that movie in Jacmel On a Monday the last day they were showing it extra.

There was a lot of people the Sunday that I came, I was there for about 30 mins standing, I had to return the next

at Jean Louis
Where did you see the Mechan Dou movie?

I'm in CAP-HAITIEN and we think that movie was suppose to come in the Haitian film festival.

Angelo, I think they need to hire the producer of this movie to think for the future of the Haitian Cinema; not someone that see money for they pocket only.
Angelo I also think, to make a movie like that you need to be in love of what you are doing and also be a very good

Two thumbs up to the producer/director of this movie.