belfim.com/pictures.php?p=4869&...Carine Delerme of Cinevision has just closed the deal on a new movie project about the life of Dieudonne Larose. 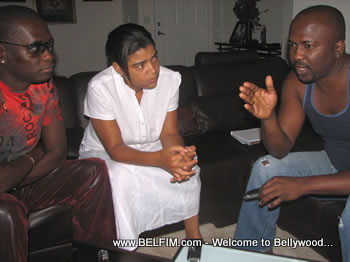 This is a joint venture between Cinevision and HSTV Production. The real life story of Haitian superstar Dieudone Larose will be told in moving pictures. The film will be directed by Haitian filmmaker Godnel Latus aka Baby Love.

This is another challenge for baby love because Dieudonne Larose is not just anybody. The man has quite a history.

belfim.com/pictures.php?p=4867&...His career spanned across some of the most famous Haitian music bands including but not limited to:

Success is measured by many different things in life. In a country where it is impossible to dream some people are crazy enough to break the barriers of prejudice achieve the level of "superstar".

One such person is Dieudonne Larose.

Haiti is a country whose history and traditions is deeply rooted in slavery. because of that, praising people is still something that is not common practice. It has not been that long, since Haitian artist began to sign autographs.

belfim.com/pictures.php?p=4866&...99% of the Haitian artist complain about the fact that they invest their entire lives in the entertainment of a bunch of ungrateful people.

"Haitien pa bay atis li yo vale," one of them told me in an interview, "it just so happens that I had to go all the way to the ivory coast in order to receive a life time achievement award."

I have been told that this the first time ever such a project is put together. Dieudonne Larose, Carine Delerme, And Babylove Godnel Latus have already signed their agreements, production will begin early June, 2008.

Carine Delerme was the happiest of them all. It has always been a dream of hers to do a project with Dieudonne Larose.

She was so anxious about the kick off meeting with Larose that she asked that Belfim.com be there to cover the event.

We stood there for hours, we laughed and we shed some tears of joy as Larose began to tell his life story.

« Divorce & Consequences is Out on DVD
Newer Article: