Star-Struck in Haiti? Yes, It Happened to Me!

Imagine being 9 years old living in a small town with no television at home and the only way to see your favorite movie stars on TV is to stand in a street corner to watch TV in the public neighborhood television set. 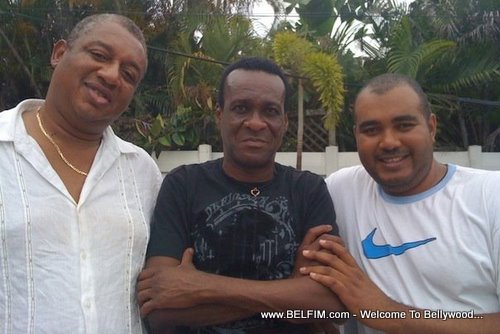 Now fast forward through time and imagine these same movie stars you were watching on that public TV set are now, not only your friends, but you get to play in a movie with them...

Can you imagine that happening?

Today is the grand premiere of the movie Dyab Baba. I have been given the rare opportunity to be a part of it and I am still trying to figure out everything that it means to me.

Yes I am in the movie... and I am still star-struck!

If you watch the teaser trailer and you've seen me before, I don't think you can miss me.

I have been quietly making appearances in Haitian movies but I don't believe I will be able to hide in this one... and why should I?

I like making guest appearances in movies but when Raynald Delerme told me "Woody, you're gonna have to 'ACT' in this one!" I wanted to say NO but I couldn't...

If you lived my childhood you would understand exactly what this means to me.

Imagine being 9 years old, living in the town of Hinche, Haiti, in the early 80's.

Except... in order to see these TV stars, you have to go stand in a street corner to watch television with the entire neighborhood on the public TV set or peep through the neighbor's window because you do not have a television set at home.

Then suddenly, you fast forward through time, and you discover that a 9 year old kid in Hinche Haiti is about to see you inside that public TV set and... with the same movie stars you were admiring growing up when you yourself stood still in that same street corner and... he probably has no idea that stepping inside the television is not beyond his reach...

It's probably not even his dream... Most of us don't dream that far... As simple, as unimportant, as you may think it is, if you are already there...

I don't know about you but I don't think I can put a price tag on that.

For a 9 year old boy from the countryside, it's priceless!

What the 9 year old boy will never realize is that, every time he sees these Haitian movie stars, even though his body has grown and they are now considered his friends, he is still that 9 year old boy, in the street corner, with his eyes wide open, staring at that old television set.

I guess that's what it means to be "Star-Struck" but unless you are the type of person who knows where you're from and who really appreciates the circumstances in your life that makes you who are today, I guess you will not truly understand what this means to me and why I took the time to share it with you.

Success is not money, you can never be successful in your life unless you learn to recognize the success of others. If you are only judging success by how much money you have in the bank... you're missing the point... The armored trucks never go to the cemetery.

To all the 9 year old boys out there, dream big dreams, and don't let nobody tell you what success is. In time you will find out.

My name is Woodring Saint Preux and I said it.

Name (required) E-mail (required, will not be published)
Subject: Star-Struck in Haiti? Yes, It Happened to Me! edit