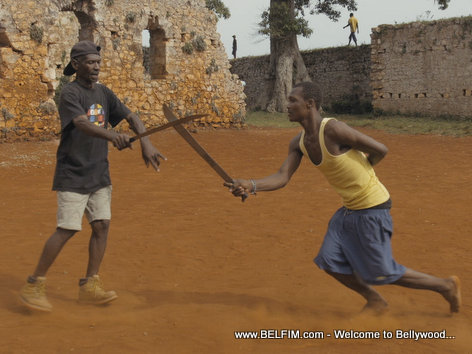 First about the movie...

Alfred Avril is a subsistence farmer living in Haiti, who garners an extremely modest side income teaching traditional Haitian fencing.

Papa Machete captures an aspect of Haitian life and culture rarely seen, showing the deeply spiritual significance of an art form that is too easily misunderstood.

Read more about this documentary and the fundraising bring it to the world at kickstarter.com

I was amazed to read an article about this movie that shed some light into what Haitian Machete fencing actually is:

Borrowing fencing techniques from French colonists and combining them with forms of African stick fighting and proto-capoeira traditions, Tire Machèt ("pulling machetes") was an extremely effective self-defense system -- proven useful in large combat scenarios, even against the better-armed French.

Following the revolution, the form evolved into a cherished practice valued for its grace and kinesthetic display. It was passed down through generations, but only trusted members of the community were bestowed with training, and just a select few were allowed to watch the sessions.

Read the full article at wlrn.org]

Wow... I don't know how many Haitians know about this...

What do you think?