We have just been informed that actress and filmmaker Wadlene Joseph aka Ms Carole has just lost her father to prostate cancer. 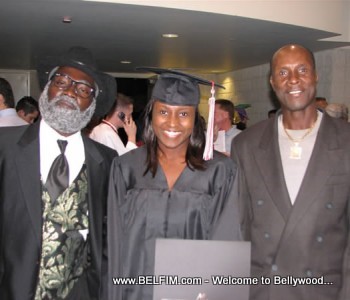 Here is a photo of Ms. Carole, her real dad Arnold Joseph, and her movie dad Tonton Nord (Johnny Fleurinord).

This photo was taken during the actual graduation of Wadeline Joseph (Ms Carole) at the Art Institure of Fort Lauderdale, FL.

A scene was shot during and after the graduation for Ti Fi Paste a #2 which explains the presence of Pasteur Nord, the masked Johnny Fleurinord.

Ms. Carole has just released her new movie Ti Fi Paste-a #3 and she was currently working on a new movie called Mistaking Spell when she got the news that her father passed away.

To add pain to misery, that same weekend, someone broke in her car and stole her laptop and all her personal belongings.

Ms. Carole has been a long time supporter of the Belfim project; our heart felt sympathy and prayers go out to Ms. Carole and her family.

On behalf of all the Belfim fans we would like to express our condolences to all the family members affected by the death of Mr. Arnold Joseph

The body of Mr. Arnold Joseph will be laid to rest in Gonaives Haiti, his hometown, on Saturday September 12 2009.