There is a television soap opera airing in Haiti called 'Marina'. 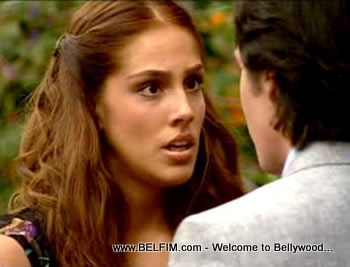 Marie Laurence Jocelyn Lassegue sharply protested against the broadcasting of the series 'Marina', a televisions series translated into French that is literally taking over the Haitian airwaves.

Marie Laurence Jocelyn Lassegue is the secretary of female condition and women rights in Haiti and she says that a soap opera like 'Marina' is a bad example for the young Haitians who watch it.

Marie Laurence criticized Marina (Sandra Echeverria), the heroin of the telenovela, and the television stations who air it.

belfim.com/picture-5757"When Marina is on TV in Haiti the world stops," says Marie Laurence Lassegue, "Haitian men and women, they will pay to watch it since most don't have electricity."

"None of the female characters in the Marina Television series are normal," continues Marie Laurence Lassegue, "that is to say they are killers, liars, manipulators. Marina herself is a a liar, How do you expect a young man who is watching Marina to have a normal relationship with his girlfriend?"

"Marina does not add values and respect to the lives of Haitian women... Imagine the consequences of these telenovelas will have on the Haitian children in 10 to15 years."

'Marina' and a supposed show called 'Au Coeur Du Peche' are capturing audiences of all ages, and the televisions stations in Haiti are getting the young Haitian minds hooked to these foreign television shows, every day of the week.

Television Stations in Haiti have no Haitian television sitcoms, No Haitian TV series, they produced absolutely nothing.

belfim.com/picture-5759Growing up in Haiti we've heard of TV shows like 'Languichatte Au XXeme Siecle', La Vi Nan Bouk, Pe Toma, we grew up listening to 'Woy Les Voila' and 'V.I.P.' on the radio. Nowadays the young Haitians are hooked to Marina, Au Coeur Du Peche, and the talent of actresses like Gessica Geneus is being wasted on National Television.

Haitian leaders impose NO requirements on these Haitian television stations, in the mean time, our Haitian filmmakers, our actors, and our production companies are left out there with no money to produce.

Like the article says question says in Le Nouvelliste "It is easier for Haitian television stations to practice piracy and BOOTLEG foreign films to air them it is to produce".

This info is being discussed on both Le Nouvelliste and Radio Caraibes FM, if was actually the topic of the day on the radio this morning.

Speaking to a friend of mind about this issue before writing the article, he, like me, is wondering is there any government agency in Haiti, some kind of Audiovisual committee, that controls the import and distribution of "CONTENT" to Haiti?

Are there any Government imposed requirements for Television in Haiti?

You may know more about this than I do, so go ahead, post comments and tell me what you think.