Yesterday, Hollywood movie star Sean Penn was supposed to be at the Cannes film festival for the screening of his latest movie, Fair Game. Instead, Sean Penn missed his movie screening so that he could testify at the U.S. senate committee about the ongoing lack of staff and medical supplies in Haiti. 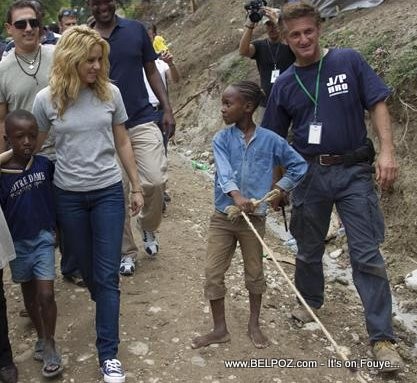 Shakira And Sean Penn In Haiti

Here is a quote from Sean Penn's testimony in front of the senate committee:

"In many cases, the bureaucracy of international aid is protecting people to death. I come here today in the hope that we will address with bold clarity the razor's edge upon which Haiti lies."

Sean Penn is the co-founder of the Jenkins-Penn Haitian Relief Organization, a relief organization that has been on the ground in Haiti helping out since the first week the earthquake hit.

During the senate committee hearing, Sean Penn mentioned that many hospitals in Haiti have already been closed and that the country needs immediate attention.

He fears that the upcoming hurricane season in Haiti may be a disaster waiting to happen due to lack of emergency services.

For more information about the Haiti Relief efforts, visit Haiti911.com

« $333,000 raised for Haiti at the Cannes Film Festival
Newer Article:

Magerit On Stage BUT Where is Tonton Dezirab? »