Haitian actor and radio host Frantzson Saintilien aka Frantz Design told Belfim last night that he is now directing his own films. He decided to go to school, he says, to learn the art of filmmaking... Going to school to learn, now that's always a good idea! 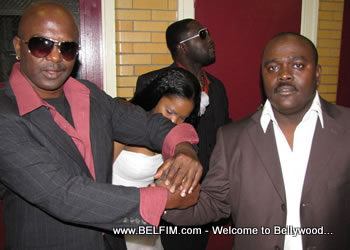 Frantz did mention to us which filmmaking school in New York he is going to but... Non an eshape nou...

In life you can do anything you want if you put your mind to it...

And if you get the proper skills...

"I am currently in shooting a movie in the New York snow storm" Mr. Saintilien says to us.

Frantz design did not say whether or not he is giving up his radio show or acting as of yet.

Once shooting is done, the movie will be edited by Samuel Vincent. This is also word from Frantzson Saintilien.

What is the name of the movie and who's in it?

You have to stay tuned to Belfim for more information about that.

best of luck to Mr Saintilien

Geri Unbeleiablve how well-written and informative this was.
Reply · December 23 at 8:22 PM
Betray frantzson saintilien is doing a great job. outthere, started with liying theif
Reply · March 26 at 9:36 AM
Tony We were the suppliers of the awards for Frantz's annual Movie Awards. He paid for them... see more
Reply · March 22 at 2:54 PM