To all the Haitian movie fans out there, and to all the men who were too afraid to ask or too chicken to propose, I got news for you... Haitian actress Michelle Judith Jeudy just got married last night, Friday, June 25, 2010. 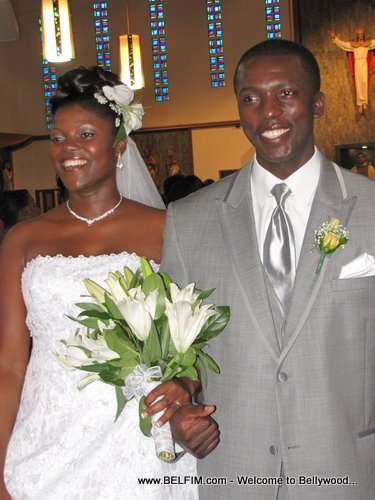 Who is the lucky man?

belfim.com/picture-9822His name is Ernest Olotch, a young man from the Republic of Kenya...

From now on you can call her Mrs. Ernest Olotch!

Many of the groom's family, including his mother, flew all the way from Kenya to attend the wedding.

Michelle's family, close friends, fans, and colleagues all came to the wedding.

Here's Michelle in her wedding dress... Isn't she beautiful?

Who's at who at the wedding...

There were many VIPs in attendance including the former Consul General of the Republic of Haiti. the Honorable Guy Victor, representatives of Haiti's Ticket Magazine, Naomi Calixte of Haiti's Radio Metropole, and Eric Prevost Jr., himself a very well known face in Haiti from the many televised government public announcements and who, coincidentally, played the role of Michelle Jeudy's boyfriend in the Haitian movie Dolores.

Many Haitian movie stars were present at the wedding including actress and singer Gabrielle Romain Cange who also happened to be the Maid of Honor, Haitian filmmaker Herold Israel, Peter Berlus, Kacendre Belizaire, Fabiola Douyard, Loukens Louine aka Master Lou, and many more.

After the church ceremony everyone gathered at the Inverrary Country Club in Lauderhill FL and enjoyed the rest of the night in the company of the bride and groom with great music by DJ Nickymix.

As a friend of the bride and as CEO of Belfim.com, I had to be there to represent you, all the fans of Michelle Jeudy.

Congratulations to the bride and groom on behalf of all the Haitian movie fans on Belfim.com